There are times when the magic of nature simply works without any poking or prodding on our part. One such night was Thursday July 24th, when a chance direction through Delamere Forest revealed more than could have been expected.

Thursday evening was one of those English summer evenings where you feel it’s a crime to stay indoors. The early evening sun was still blazing away and being in its rays made you rapidly too hot. So, my wife and I went out for a walk in Delamere Forest. Her intention had been to find some nettles to make into liquid feed for our vegetables. Mine was to have a lovely walk in the forest, and to see what happened if we followed a new path. I love new paths

I already had a potential route in mind, and checked with M that she hadn’t walked that way before. She hadn’t. So, I parked at a little lay-by just at the end of Hatchmere village. M immediately got involved in plucking out the tall nettles at the side of the road, using a plastic bag as improvised gloves. I got a small bag of dowsing materials ready – just in case we needed them. 😉

The path was almost invisible amongst the nettles, brambles and ferns and didn’t look inviting at first. It led us to a heavily shaded damp path next to a dark brown stream, and my first thoughts were that I was leading us both along a path to nowhere! At that point I got out my smaller dowsing L-rods and handed them to M, who looked at me puzzled – her previous attempts at finding energy lines had been, frankly, rubbish. But this time I said she would be helping us find the way, not searching for energy, so she took them somewhat reluctantly.

At the next junction I asked her to try to find the “right” path – the path with the nicest walk. After a minute’s instruction on getting into the right frame of mind and asking the right question, she got a response. Up the hill. Up the hill we went, even though M couldn’t make out where there was even a path at first.

Once at the top of the hill the path opened out into a nice gently oscillating wave that took us over the hill and down the other side to re-join the path we had just branched off from, but now at a point where there was no mud – neat! “Good choice!” I said to her as we ambled on. “You can do the next one too!”

Now I joined in the fun. I got my rods out and asked them to lead me to a powerful tree. I kept it as general as that. The rods indicated I should follow the path I was on. I kept them poised to check as we walked. As I watched them swerve around a bend in the path we spotted a large birch tree in our way. The tree had been blown over at some stage, but had managed to keep some roots in the ground next to a stream, and I guess that was enough to nourish it to keep growing, 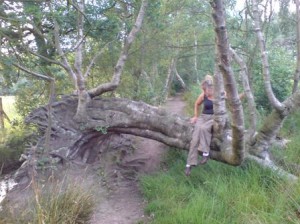 The tree was obviously special. As we approached we saw a plaque that someone’s grandfather had hammered on to the trunk to denote that this was a special tree for him and his grandson too. Touching. The tree was indeed at a very nice spot – if you sat on its wide horizontal trunk you could watch the sun setting over a perfect English country scene – dun cows munching lazily in a field of fluffy grass – it had perfect feng shui qualities.

As we played in the trees branches, walking around and under its arched fallen trunk, we laughed. This birch tree was definitely on my list of sites to return to, but right now it was just great to appreciate it. We wandered on.

At the next junction I got M to make a decision again, as there were five choices. The rods told her that the right-hand path was the nicest walk. Behind her I did the same and got the same result, so we agreed to follow that path. It was always going to be her choice, but I was interested to see whether my rods agreed. So far, they did.

It widened into an avenue of towering beech trees that gave us a sense of space and lent the trees a certain majesty as their leaves stilled the warm evening winds. At the next junction, M again decided – left. Again, my rods agreed. I decided to leave it to her – so far the walk was beautiful, and her decisions looked more certain, and in no way “forced” or “random” – the rods were really moving for her as they moved for me. This, in itself, was a breakthrough so I put mine away. Now I was empty handed, so I said to M: “I wish I had a stick now, to walk with. I was hoping to find a staff on this walk.” As I said that M said “Look at those nettles – they’re waving!!”. In front of us, on the right of the path was a clump of nettles whose leaves were waggling in the breeze that was coming over the peak of the little hill we were climbing. They looked just as though they were waving at us! We smiled and giggled at the amazing sight. “Looks like you picked the right direction again”, I said.

As we walked over the crest of the hill we stopped – right in front of us, lying over the path, was a branch of about 11 or 12 feet in length. It was in two parts – one bit was about 6 feet long, then it bent at a notch another five feet or so. Hadn’t I just asked for a staff? We looked at each other in amazement. I snapped the branch at the notch point and handed M the smaller piece – both of us had perfect walking sticks now. In my head I beamed with pride and thanked the forest for providing me with a staff – a beech staff, as it turned out! [edit: not a birch staff as I had first thought – I’m better at identifying trees now] This felt like I was beginning to tune into the forest – the dowsing so far had been strong, our mood was high, and I was full of that “right” feeling that always accompanies these druidical moments. Already this walk was a special one – and I had the staff I had been looking for as a reminder.

The walk continued to show us delights – a “beach” of sand in the middle of the forest, a series of “totem poles” of stripped pine in a clearing, and the thrill of watching mountain bikers taking turns to race down a hill and get airbourne off the jumps.

Pleased with our walk I asked M to dowse the direction back to the car. Within ten minutes we were back at a junction we recognised, and in another half hour we were back at the car. My staff fitted exactly across the back seats of the car. Then I knew I had had a perfect evening’s walk.