Let me set the scene: a cool but calm Winter’s day, two fools with copper rods and petrol station sarnies in backpacks wander purposefully and expectantly towards a specific place. All around the sometimes leafless trees flick from deciduous to evergreen and back again as they pass hesitant hordes of fresh air fans who are cycling, jogging or walking without so much as an upward glance at the majesty around them. Occasionally one or other of the fools stops to remark upon a tree’s shape, its size, its qualities. Children hooked to parents are pulled by at a mildly-exhilarating pace, pedalling reluctantly.

Such was the scene as we headed deep into Delamere Forest last weekend. I guided Kal towards a place in the forest where I knew two trees that grew side by side – a tall elegant pine next to a sturdy and established beech that leant over the main path. As we arrived Kal walked between the two and spent a moment feeding his energies. I smiled because I had been there before and knew why he had chosen that spot. Like Don Juan Matus in Carlos Castaneda‘s books, Kal had instinctively located the most energetic place where the energy of the two trees melded and swirled in a little power centre of a female vortex of life force. He seemed reluctant to be drawn away from it, but we had work to do.

This part of the forest, although on a main path, was unusually quiet and calm. Only occasionally would we be disturbed by bemused and slightly anxious families, or the rare smile of someone who was either amused at our activity or knew what we were doing. We were dowsing again. The first ‘proper’ dowsing field trip of the new year. And this year we had guaranteed ourselves was going to be one hell of an active twelve months! ‘Proper’ because we had been dowsing in our houses, creating and relaying our manifestations to each other, and then the day before we had been on an only partly successful trip out to North Wales. Details to follow on that one. That’s going to make interesting reading, is all I can say about that now,  if only for the things it didn’t show us, as much as for its revelations. Kal, of course, blames The Trickster – his anthropomorphic embodiment of a prankster spirit that is wholly accountable for our occasional failures. Frankly, though disappointing at the time, our failures are often as revealing as our findings. 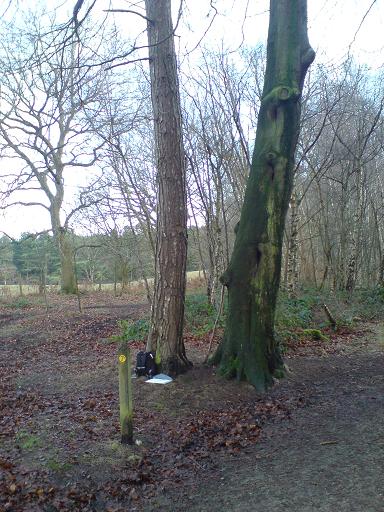 Today, in the depths of the forest, and with renewed vigour and intent, I felt something was going to kick start our dowsing year, and so it proved to be. As we dowsed we only had the remnants of the previous day’s torn-up question sheet to remind us where we were headed with our work. As we were surrounded by trees, and I was still intent on finding out what effects the time of year was having on the natural energies, we started asking questions about energy paths, tree nemetons (or auras) and our typical topic – colour bands.

Here are some of the things we found that afternoon:

Yes, pushed. I have been returning to my martial arts studies, but this time from the internal energies angle. Consequently, I wanted to see if I could feel the chi energies, so we tried a little experiment. I stood with my back to Kal and concentrated on my own nemeton. Kal then walked towards me dowsing for its edge. When he found it he pushed it with his hands. When he did that I involuntarily swayed forwards, feeling like a had been gently pushed in the back! I put my hand up to indicate that I had felt it and swivelled to find Kal crouched with his hand in position and looking slightly startled. He had seen me sway as he pushed.

We tried again, this time using my colour-band field. I concentrated on firming the outer edge of the violet band of my energy field. After a few seconds I felt the gentlest of pushes and put my hand up. Again, Kal confirmed the dowsable range he had marked, and was holding his hand at that exact point, transfixed in position. Stunned, almost.

Followers of Kal’s up-and-down relationship with trees may wish to hear that Kal spent a nice afternoon in the presence of these most kindly beech and pine trees. I had been lead there the previous summer whilst arrogantly commanding the rods to show me the most energetic and powerful tree in the forest. Well, it had worked at Alderley Edge, so I thought I was on to something. Little did I understand The Rules back then. Now I am much more humble in my approach!

I knew this beech tree to be easy to work with, and honest in its responses. Sounds mad, but if you get into this dowsing stuff, you may find yourself being lead astray on more than one occasion, and it pays to learn a little respect and humility early on if you don’t want to end up panting, covered in sweat, and lost in the dark heart of a forest whilst you try to extricate yourself from a fool’s errand.  “When she was good, she was very very good, and when she was bad, she was wicked.” Isn’t that how the rhyme goes? So true.

Following the lesser known path through the forest.