The Triad of Life – Awen, Flow and Abundance

As druids how do we understand concepts such as ritual, offerings and gifts? What IS the nature of our interaction with Nature? To what purpose do we strive to live ethically and energetically? In this short post I hope to propose the concept of a Triad of Life – three powers that work together in harmony – that will go towards answering these questions. 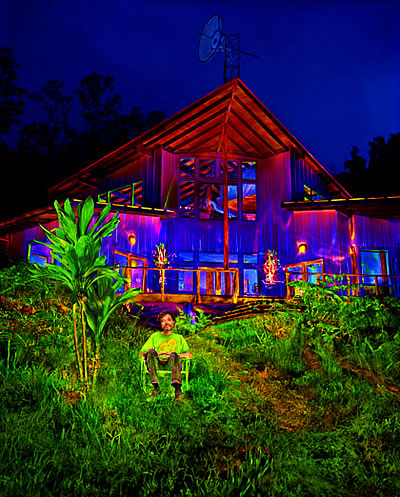 To do this I employ some of the ideas and discoveries of the psychedelic guru Terence McKenna. McKenna was an explorer of the psychic space beyond the three-dimensional structures. To aid his exploration he employed entheogens – plants that naturally facilitate journeying much as shamans in most cultures employ such techniques. In order to better understand the following concepts that I am about to discuss I would recommend that you are at least familiar with some of McKenna’s work and ideas. Please go here for an excellent archive of much of McKenna’s audio/visual talks.

Firstly, let’s talk about Flow. In my opinion Druidry is an attempt to align oneself with and add one’s energies to The Flow of the Universe – the natural course of all intention from the grandest to the smallest possible level. This is the same notion as the Observer Effect – or the idea that all of our actions, no matter how small, have a consequence and an influence. However, what is important to followers of the druid path is that those actions be in harmony with the Great Motion of the progression of the Universe, or of God, towards its eventual fulfilment or culmination point – what McKenna would call the Omega Point of Transcendence.

The concept of flow encapsulated in Bruce Lee‘s memorable phrase “Be like water” contains within it the idea that this natural path is one of least resistance – a path through the landscape where the least perturbation to the natural cycles is found. I see in this concept the kernel of the ecological and ethical moments that are fundamental to the druidic ethos. That is not to say that influences cannot be profound – they certainly can – but the starting point is always to be in harmony with the force that is currently in “flow”. In other words, if the change required is great and natural, then the influence intended by the druid in his work should be one that equals or harmonises with this momentum. That is how one stays in accordance with The Flow – by becoming the ripple or the tidal wave depending upon the environmental conditions generated by Nature herself.

What is it that is “flowing”? Yes, it is all of the physical elements that go to make up the Universe, but when we consider that these physical elements are really just low-density vibrations, then what is the rest of it that is carried along or upon which we are carried along? Is it not some subtle energy form that we can perceive but cannot pin down? Is it not the energy that we can feel but cannot substantiate? And is that not the Awen of ancient mythology and modern re-interpretation? [see here for an alternative explanation of Awen, and here for the traditional explanation]. It is Animus and Anima at play together, the male and female forces whose spiral dance motivates the interchange of subtle and gross energies between all things. It is the elusive subtle energy or life force that is sought after by the druids as the key to creativity and life itself. It is the Ankh of Egyptian lore.

So, we have Awen – the force that stimulates life, and we have Flow – the direction in which the Awen is motivated to move, or at least to direct our attention. With these co-ordinates can we now define some purpose for these forces at play in the world? I believe we can. In my opinion, the expression of Awen via the Flow of the Universe results in what I term Abundance. Abundance is not just the creation principle, it has contained within it the idea of fruition and enervation of potential. It is abundance that propels the creation cycle – it is the invisible hand on the wheel that spins the dynamo of creation.

I remember Terence McKenna talking about his DMT experiences, and how several times when he broke through into another frequency of existence he was surrounded by curious sentient entities. These ‘imps’ (for want of a better word) encouraged Terence to manifest energy forms from his imagination, and then would take great delight in seeing him do this. When I hear accounts from the edge of hyperspace such as this it makes me think that within all levels and frequencies that are available within our Universe there is positive feedback and encouragement for the act of manifesting life and the act of creation. Terence went on to consider that the universe sought increasing complexity, but I consider that the Universe is instead seeking an increase in abundance – it is seeking to evolve through the fruition of potential into realisation.

If we consider that everything in stasis (i.e not being actively considered or acted upon) has potential. When touched by the motivational force of Awen in Flow then a bio-feedback relationship is established – in other words – giving our energy to something stimulates it and promotes the potential for it to return some transformed energy to us in a reciprocal manner. That stimulating effect is how I think of aabundance, and for me it answers the whole question of “why?”. Why is the Universe or God seeking to encourage abundance? Because it is evolving towards the realisation of all potential, and so the cycle of the bio-energetic feedback loop gives humans the opportunity to gain new energies from those which they discharge or offer to Nature. The recipient of the intention of Awen, whatever that might be, is motivated to grow, increase, come to fruition, blossom, increase and improve. The giver then becomes a receiver too, and the encouragement results in more potential for a repeated experience, thus fulfilling the evolutionary drive – the Flow of the Universe towards Ultimate Fulfilment – the final endpoint of the unfolding of the Universe – McKenna’s Eschaton.

Think of how many situations we see this triad of Flow, Awen and Abundance in action every day! Think how often we see potential realised through motivation into fruition! The planted seed is stimulated to grow by the action of the sun warming the earth. The child is encouraged to grow by the appreciating smile of the mother. The musician is inspired to create a song by a natural event like an eclipse or tidal wave. See how this natural cycle is neutral (neither good nor bad) and how it engenders an increase in life and the quality of life on this planet?

How do druids make this triad of Awen, Flow and Abundance real? Their rituals, their timing, their energy feedback, their creativity – the Bard stimulates the Awen; the Ovate learns to align himself with the Flow of the Universe; the Druid promotes the feedback loop to create Abundance. So, every day I consider that druids are seeking to use educate themselves in the ways of this triad of life, and that they are inventing or re-discovering the ways that increase the natural life of whatever they interact with. This is how I see the benefit that druidry provides in the form of the Triad of Life.