Seeking the Stag on a Blue Moon

My quest had been given to me to “seek the stag” and afterwards to “raise the horns of power” when I asked the question at Froggatt Edge. Weeks later at Mitchell’s Fold I wanted to learn more about what that would entail. Luckily we had picked a perfect evening for such a task – a Blue Moon – the kind of full moon that occurs only rarely.

I was led along a path leading to the eastern side of the circle. I thought that I might be taken through the eastern entrance, but instead I was taken further outside the circle into the marshy hinterland of the northern side. Then onwards, around the edge, about ten feet away from the stones, and moving in a wavy form, until I was back to the eastern side, but this time close to the circle. Then the rods moved inside and I was directed behind the tall stone and to the female stone that I knew and loved – a flat grey familiar stone wide enough to sit on comfortably, and warmed nicely by the sinking sun.

I did my usual protection and connection. Once ready I meditated a while and cleared my head of other thoughts except one simple statement – what information could I learn about the directive to “seek the stag”? 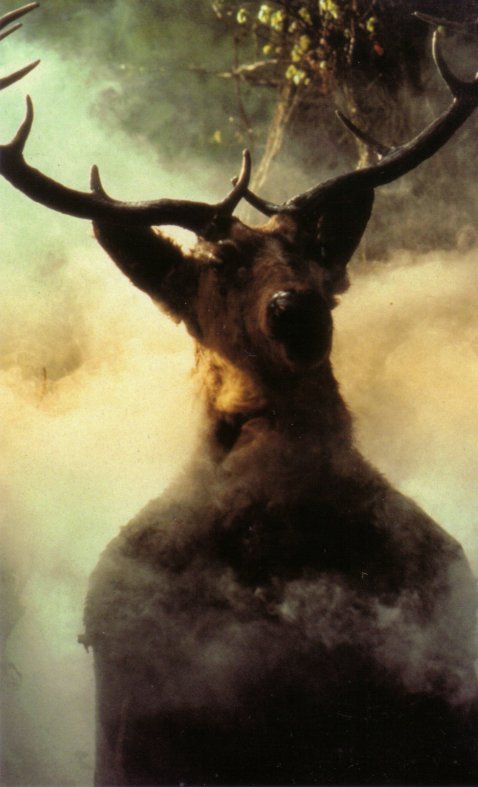 An image began to form in my head. I was running through the wilderness, the undergrowth and low dark branches of a forest in the dim light of twilight. I was running uncontrollably, as though being pursued, yet I didn’t feel any fear. I was simply exerting myself to the maximum, running as fast as I could. Perhaps I had hooves and sported antlers – I couldn’t see myself to know. I felt like I was running with four legs not two, but the overwhelming sensation was one of hurtling past the barriers as they arose. I was untouched. I never hit anything, or fell, or stumbled,. I was running wildly, freely, and naturally.

There was a silent indication that I needed to learn how to induce this state. The feeling went on to insist that once I knew this feeling in a physical and spiritual way – once I could call upon it in a magickal way – then I would raise the H0rns of Power. The horns would grow on my head – they would be like a stag’s weapon.

I asked for more information about the Horns of Power. What was their purpose?

Raising the horns is a defence mechanism. I would be without fear when they were present. I would be able to lock antlers with any criticism, foe or intent which sought to wound me or best me. I would feel like I could match any force sent my way, and do so without fear. Now that’s the kind of tool that any jobbing druid would want in his toolkit!

There was more to come. I had two other questions I wanted to ask at Mitchell’s Fold. Expect more posts to follow.